Originally published in "Pet Folio", Volume 2, Issue 4, August/September 1999. First of all, let me begin by saying that I consider myself a private person when it comes to family troubles.   But, after adjusting to our plight, I have decided to share our story with everyone in the hope that it may help someone else facing the loss of a cherished pet.   Never very far from me, Pepper is lying at my feet as I write his story.  Pepper, one of my competition dogs, one of my best friends, a sable Shetland Sheepdog male;  "Peps" turned seven years old on February 12, 1999 . I still remember him as a surprise birthday present puppy from my husband, Greg. To Pepper's credits are numerous agility titles, herding titles, obedience titles, first place in Open Agility at 1998 Sheltie Nationals in Tuscon, AZ. He has also been, until this happened, a working therapy dog at Washoe Medical Center Pediatrics.  He was Washoe Medical Center's very first Therapy Dog.  Because we have compromised his immune system with his medical treatments, he can't be exposed to potential infection now.  He's been the gentle little dog the kids could walk in the hallway and cuddle with on their beds.  Many of the kids cherish the "magic" Polaroid pictures of them with "Dr. Pepper". For a number of years, we have taught Responsible Pet Ownership programs and dog safety in Washoe County's elementary schools and libraries.  He truly was an extraordinary dog.  Those who had met him will always remember him as the little "Lassie dog."


Revised : 1/13/2015
My day started out normally. I had bathed Pepper, and was grooming him that morning, January 7th, 1999, when I found the lymph nodes under his jaw were enlarged. They were grape-sized. He pulled away as I brushed him.  My heart sank, for I knew what this might mean. It was all I could do to get through my morning teaching private obedience classes.   As soon as I was free, I went directly to my veterinarian's office.

Yes, unless it was just reactive nodes, Pepper had cancer and the prognosis would be bleak. The rug had been pulled out from under my world.  My precious Pepper dog was dying.  Within 15 minutes of entering the Veterinary office in Sparks, Nevada, a biopsy was done.   Tissue was removed and sent off for a report.

The days of waiting were the hardest.   I immediately started researching Canine Lymphoma, a fairly common disease I discovered.   I cried as I watched him and waited.   His cancer grew.   As if angry at being disturbed, the nodes grew daily, and in just a few days were the size of walnuts.   His bark was even affected; the swelling was closing his throat.  When the report arrived, it was not definitive.   We still didn't know for sure!!

At the time no treatment was available in Reno. On January 18th, were referred to the Sacramento Animal Medical Group, in Sacramento, CA, specifically to Steve Crow, D.V.M., a veterinary oncologist.   Dr. Crow is well- recognized in his field, and we were fortunate to have found him.   Another biopsy confirmed our fears.  Stage III-A involvement.   Dr. Crow didn't sugarcoat anything.   The treatment would be reasonable and humane.   The alternatives were explained and offered to us.   One,  to keep Pepper comfortable, and let nature take its course (expected survival time four to eight weeks).   Two, to treat Pepper using combination and single-agent chemotherapy drugs (expected survival time of 24 months, with an average of 12 months). Only one out of four dogs live longer than two years. There really wasn't any decision to make.

Pepper showed no other signs of the disease. He was in top physical condition as a toned agility athlete.   Looking back though, we think he had slowed down a little on the agility courses that summer.   But we weren't sure whether we were just comparing him to Gats-B, one of our other agility dogs, who is very fast, or if he was really in fact getting slower. No other signs were evident to us.   Dr. Crow assured us that dogs did better with chemotherapy than people.   A monoclonal antibody sensitivity test was done, too, and the nine-week chemotherapy protocol was started.

We chose the most aggressive protocol treatment available.   It is referred to as "POLCA," an acronym for the names of the drugs used.   There was never any doubt that we would treat Pepper for this incurable disease.   Thank God, I had a wonderful husband, Greg, my best friend, my support staff, and my partner.   Greg is as immersed with our dogs as I.   Thank God, too, the money would be there.

Pepper had his first chemotherapy treatment on January 18, 1999, in Sacramento California.    Five days later, he competed in a national agility trial in Santa Rosa, California.   Pepper and I are never nervous before a run.   We loved to work together.   And whether we do well or not, we always have fun. You might wonder why I would even compete with him while he was sick.   Well, to take agility away from him would be so cruel.   He absolutely loved it.   His physical and mental health are both very important.   Positive attitude and exercise are part of the treatment in my book.

I was nervous that day and when we came out of the ring after his first run, I burst into tears. We had just finished Pepper's Outstanding Open Agility Title with a first place, a perfect clean run.   He also finished his Superior Open Jumper's Title that day, also with a first place, again a perfect clean run.   Out of the eight runs that weekend, he qualified and placed 1st six times in the 16" class.   His course times were about 15 seconds slower than usual, though. We just took it easy, wanting to have fun and finish.

The chemotherapy treatments were an emotional roller coaster ride.  I cried in the shower most days, so Pepper won't know.   He is very sensitive to my feelings.   I drove once a week to Sacramento in bad weather that winter. Blood tests, some good, some not so good.  Our life was Emergency trips to see to the local VET.   Long days and nights with no sleep.   At one point when he was so sick from the drugs, I thought maybe we had made the wrong choice.   He had a very adverse reaction to one of the drugs.   A change in his protocol, however, was made.   He never had that drug again.   On the plus side, there was available a new dog food with special nutritional support for dogs with cancer.   N/D had been developed by Hills Diet for cancer patients, it helped nourish their bodies and fight the metabolic abnormalities.  Some dogs suffer from a condition known as anorecia-cachexia syndrome (a wasting condition).  The formula, key ingredients containing omega-3 fatty acids and amino acid arginine, was high in protein and low in carbohydrates, thus theoretically starving the tumors.

Canine Lymphoma is an incurable disease, however, treatment can result in a good-to-excellent quality of life for most affected dogs.   Please, if you don't already, check your dog regularly for lumps and bumps; include the neck and armpit areas. The sooner Lymphoma is discovered, the better the prognosis. Should your dog be diagnosed with Lymphoma, do your research and find the best VET for treatment or go to the Sacramento Animal Medical Group in Sacramento, California and the contact the Morris Animal Foundation in Colorado. Both are very helpful and will send you information.

What was our our life like then, you ask?  It had its highs and lows.    I found myself in tears at the drop of a hat with no warning.  Just driving down the road, tears would come when I least expected them.  When I was tired, they came.   But there were the really good days, days when we shared very special moments playing together and training.   I knew in my heart that those times would be few, and never would come our way again.   Every agility run is a gift I cherish.   I watched with a smile on my face as Pepper played with our new puppy "Tag."    Tag (yes, another Sheltie) joined our family three weeks before we knew that Pepper was ill.   I believe that we was sent to us for a reason.   As I watched them interact, I know that Pepper had a big job to do teaching Tag, as he had done with Gats-B, before he left us.   I needed to be strong for him.

The downside...FEAR of the unknown... the end.   The diarrhea, the vomiting, the cleaning up.   The sleeping on the floor with a sick dog.   But, there was a bright side too.  We had more time and memories to make together.    I wasn't ready to let him go.   Bright eyes, a wagging tail, the happy barking, an empty toy box with toys everywhere.   A burst of energy and high spirits. Watching him sleep in the sun and roll in the grass.   His cold wet nose, his looking at me with his food dish in his mouth, his chasing birds in the yard.   Always a loving heart and hope...always hope. Memories made.

Hug your dogs.   Be kind to them.   They are with us for such a short time.   We accept the pain because our lives would be so dark without them.   Please remember Pepper and all the others who have left us too soon.  I wish you had the chance to meet him.

One thing I would like everyone to know, and to please keep in mind -  most dogs will adjust to chemotherapy better than Pepper did.   He was very sensitive to the drugs, and his reactions had been very dramatic.   Most dogs have only slight reactions.   The quality of their lives is good until the very end.   I was assured that Pepper will feel no pain when the time came.

Updates: On 11/15/99, after only 10 months of treatment, Pepper passed away. He was at home with his family, and was helped to pass peacefully. He is greatly missed……

In 2001, we established the Pepper Memorial Cancer Fund (#335) with Morris Animal Foundation to further Canine Lymphoma Health Studies.  The very first annual Pepper Memorial Classic Agility Trial was held in April, 2001, and thanks to a great group of supporters, over $6,000 in profits from that trial were donated to this fund.

To date, over $122,000 has been raised and donated through the Pepper Memorial Agility Trial, and individual donations in Pepper's name for Canine Cancer Studies. 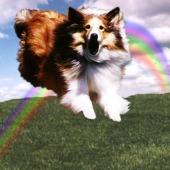