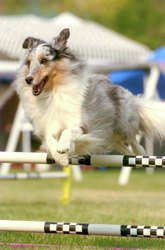 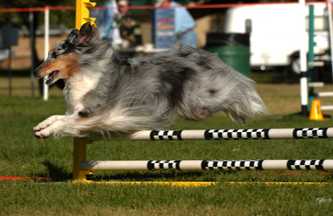 Pebbles, or "Pebbledees" as we called her, won our hearts the first 5 minutes saw her.  She needed us. Re-homed because she was too small, a blue merle, only 12 1/2" tall, 14 pounds.  She immediately fell in love with Tag, who wouldn't give her the time of day, while Sweep was in love with HER.  We had a real puppy love triangle going.   When we first took her home, she was shy and afraid of the world.  She really didn't know how to be "Sheltie" or even a dog.   After a few short months, our four rowdy boys taught her to trust and have fun.  This little girl turned out to be quite the outgoing little "missy".  She used Trapper for her personal tug toy, and actually nipped at Gats-B's heels as they ran around the yard.  She became a regular Sheltie.  As for agility, her training came along slowly. We re-homed her to give her a better life, not really for agility. But she accumulated several titles, and enjoyed just being "out there" with Lin.  She was quite the crowd pleaser too,  making Lin go through quite a few antics just to get her off the start line.  But, once she got going, she could really move.  At 11 years old, Pebbles was retired for the third time. Her structure was poor .  Lin first retired her after all Superior Novice titles, and then only played at home. After a year she came back and earned all her Open Superiors.  Lin retired her again, waited a year, and let her back again into Elite, but very quickly it became too much for her little body, and she retired permanently, enjoying just sitting on the bench, wearing the team jersey and being the cheer leader.